1981 - a steering committee of 10 area citizens gathered for a series of public meetings that winter. Their goal was to determine if there was public support for a YMCA in Fayette County. After many meetings and surveys, the group decided there was enough support to pursue a YMCA charter.

June 28, 1983 - office space was donated to the YMCA; it was located in the First National Bank building. Dennis Mohrman was hired as the first qualified executive director and started on July 7, 1983. 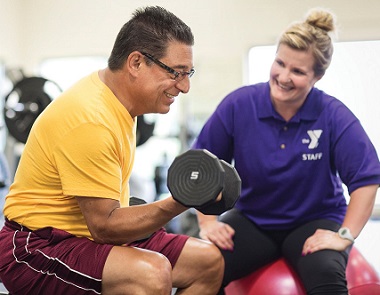 1991 - the thoughts of having the YMCA, park district, VYO and city collaboration to a build building happened.

1994 - The first Community Center capitol campaign study was done at the cost of about $5,000.

1998 - expansion of the YMCA to other half of the building added additional weight training machines.

2005 - the new building planning process officially started May 1, 2005, with a meeting of key individuals.

2006 - the KC College Master Site Plan was released and YMCA building was on their site. Vanseal wins YMCA Grand Raffle and donated the $10,000.00 to the YMCA for the new building.

2012 - the YMCA completed the DOJO project in October. The YMCA set a new record in memberships, with membership now a total of 855.We were also able to add soccer goals and bleachers through donations from Ronald McDonald House, Feller Oil & Fulk Construction.

2013 - the YMCA completes Racquetball Project. We finished what we started in 2009.